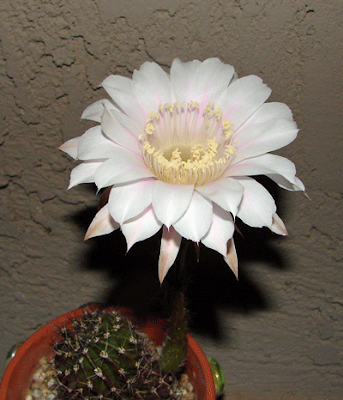 A very small Echinopsis with a huge flower. I took this late one night last week to catch the flower at its peak. The cactus produces one flower each year, which probably wears it out! As the cactus gets older, it should produce more flowers each season. 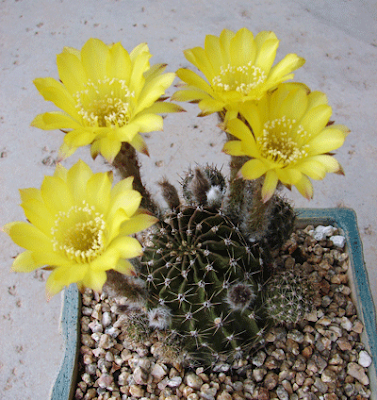 
A new Echinopsis in a new blue pot. I bought this Echinopsis hybrid last year for the yellow flowers, and the pot was a 2008 Christmas gift. 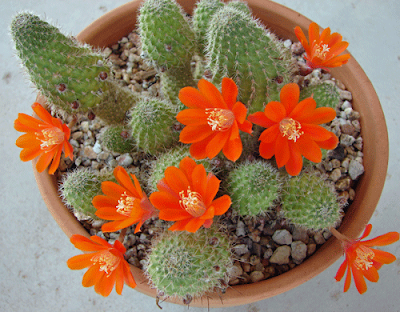 
I can count on this small Rebutia to produce numerous bright orange flowers each year. It will have round after round of flowers until late July. I think it's making up for lost time and previous close calls. 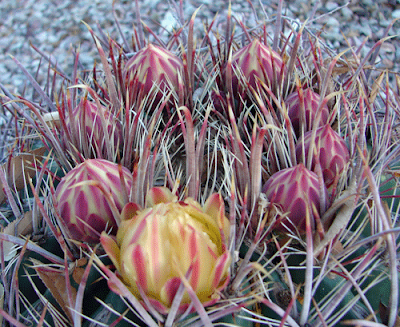 The first buds on this Barrel Cactus are really fat, so the flowers should be larger than usual, as well as early. The cactus itself is all plumped out from our recent light rain. Barrels take in any moisture they receive to store for use during drought periods.

Hello Aiyana
It always amazes me how beautiful the flowers are thrown by cactus .. such a harsh plant producing such brilliant flowers .. the white one is truly a stunner .. the rest are so pretty as well !

I totally agree with Anne Fannie -- I had no idea how gorgeous cactus plants were until I started visiting your blog. The flowers this week are just amazing, as always. Interesting to think that this Echinopsis only produces one flower each year. That flower is a masterpiece though -- the pale pink shading, its size, and beautiful shape. Exquisite!

Your cactus plants always leave my chin on my chest!!

The first picture is amazing! No wonder the bloom wears it out.

I'm always amazed at how gorgeous your Cactus blooms are Aiyana! They almost don't look real, their just so perfect in shape & color. :)

Wow what colors you have this week. I really like the first flower.

Your lovely never cease to amaze me! The light pink tinge to the white cactus is perfect and you captured it perfectly! Of course, I love the orange blooms also. Still no Mr L. Jean

Wow, that Echinopsis really does have huge flowers. :) I love the pictures!

wonderful blooms, as always. It must be a wonderful time of year there, with all the cactus blooming... the saquaros are coming in about this time aren't they...

Your cactus blossoms are amazing. The white one is stunning. So beautiful! ~~Rhonda

I showed your blog to my Mom and she is very envious of you as you have so many of your cacti in flower. My Mom is happy if 1 or 2 are flowering but then, she doesn't live in a desert. ;-)

Wow, what a whopper that georgous white flower!

Awesome cactus blooms.
Cactus sure dont look like they would get such nice flowers, but it is just one of those twists of nature.

Thanks so much for sharing these lovely blooms. I am especially fond of cactus.

Till I visited your blog, cactus in bloom was a kind of paradox for me. Well, not only has my viewpoint taken an about turn but I find myself desperately infatuated with cactus blooms, and I never get tired of repeating that whenever I get to comment on your posts.
The barrel cactus looks fascinating and so is the unique adaptability of these beauties to the harsh environment.

I never tire of seeing your wonderful cactus blooms. I only have one or two but this week on cactus clump flowered and it was gorgeous. I keep looking at the photos of it!

Gorgeous cactus flowers! I love them all! I can't seem to get enough of these thorny plants that put out such amazing blooms. My Ferocactus isn't blooming- it is pretty small though.

The Echinopsis bloom is spectacular. It will be fun to see the blooms of the Ferocactus. The buds are an incredible colour!

I love the look of the ferocactus blooms and spines all together there! B-E-A-U-T-I-F-U-L!!!

flower delivery in the philippines said...

Oh! those cactus flowers are so pretty. I once had a cactus in my garden but i've never seen it bloom like the ones you have.