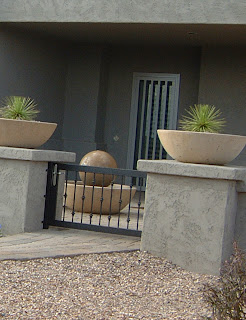 The sound of trickling water here in the desert makes it seem cooler somehow, so a fountain in my front courtyard was a top priority when I designed my landscape back in 2005. I didn't want one of the typical Mediterranean styles that are the most common around here because my house is more Southwest Contemporary in style. So, I chose a wok and ball style fountain that basically just delivered water up the center of the ball and bubbled up just enough to wet the ball. The photo, taken soon after installation, is not the best, but you can get the general idea.


All was well for several years, but eventually the pump seemed to lose its steam, so we sought to replace it. What a farce that turned out to be. In order to replace the pump, the large concrete ball had to come off its pedestal, the pump replaced and the electrical cord rethreaded through a special opening. The first repair company was unable to move the 800 pound ball, even with four helpers. The second repair company brought a small army and removed the ball, but they were then unable to figure out how to remove the pump's electrical cord. The third company brought a new pump, put it in place, but then couldn't figure out how to rethread the electrical connection. They said they would be back as soon as they figured it out, but they never returned. I guess they never did figure out how to do it. So, the whole thing sat in four pieces for several months while we tried to find a company that could handle the job properly. By then, we had put so much money into the various attempts at repair plus the cost of the new pump, that hiring yet another company seemed kind of stupid, so we just decided we didn't need a fountain. I had our landscape maintenance crew roll the 800 pound concrete ball to our back yard, and we converted the fountain into a planter with a kinetic wind sculpture in the center.

﻿The ball now sits in my backyard, as yard art. It also makes a seat of sorts, except in summer! If I ever get enough ambition, I may Mosaic the whole thing.

The whole ordeal of changing over the fountain was so frustrating that I procrastinated in purchaing potting soil and plants. Today I finally got around to getting some seasonal bedding plants and soon I'll have some flowers, fragrance and movement in my courtyard. However, I've just added to my garden chores because I have one more thing to hand water! Come summer, I'll probably fill the thing with rocks and just let the wind do the work.
at Thursday, December 16, 2010

Aiyana .. I don't mean to chuckle here but my week has been awful and this was just too ironic and funny not to say it made me laugh .. I understand it must have been so frustrating .. it should have been a simple replacement and it turned into the "money pit' nightmare that some garden adventures do turn into despite our best efforts .. I also had to giggle over the foresight of your prediction that putting plants in there will only last for so much time and then they will be ripped out in favor of rocks and letting the kinetic sculpture do its thing.
Practicality will win out won't it?
Joy : )

You would love the sounds we've had here recently - the lovely trickling noise of melting icicles dripping into soft snow!!

I don't understand how they couldn't figure out how to rethread the cord. Couldn't they have snipped off the plug, ran the cord through, and attached a new plug? The new plug wouldn't be in the water, so you'd just need an outdoor replacement plug. That usually seems to be the situation with these sorts of things. I know it's a bit moot, but I'm just confused. It's like a puzzle!

Anyway, I love the concrete ball in the landscape. It's lovely in all of its 800lb glory!

Just popped round to wish you a merry Christmas Aiyana and a happy, healthy 2011 filled with loads of garden fun!

Weird that none could repair your fountain. I bought one this year and am very happy with it. So are the cats coz they drink from it regularly. Right now it's empty as we are have a cold spell, a very cold spell with loads of snow and frost.