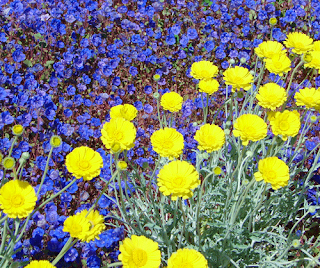 My back is sore from spending hours each day picking weeds--something I've been doing since our record rains in January, February and early March. But, all the rain did bring some nice spring color to my garden. Seems like things are blooming later than usual, at least by a couple of weeks. 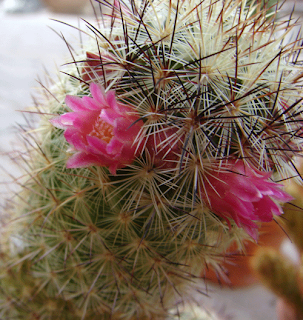 Several species of Mammillaria are now blooming. By now I usually have many cacti in bloom, but so far, flowers have been sparse. 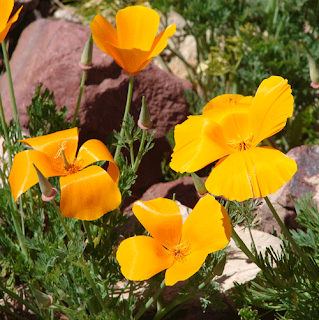 I have a nice stand of California Poppies in my front yard, and very few in back. Another mystery! 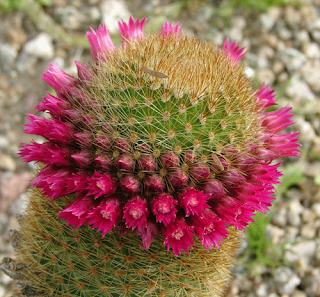 This cactus outgrew its pot, so I just decided to plant it in the ground last fall. So far, it's been doing well, and it's one cactus that bloomed right when expected.

You have beautiful flowers and unique to me. I've never been to the dessert. I especially like the two different Mammillaria flowers.

Your blooms are so bright and pretty. My dad lives on the desert too and he said they will have a lot of wild flowers where they live because of all the rain earlier this year also.

That first photo is amazing! What color:)

The bluebell and the marigold are a super combination. I also love the California poppy and the cactus looks like it has a flower halo on. Beautiful! Jean

My cousin lives near Phoenix, and she swears nothing grows there. Well, I'm sending her to your blog. Your flowers are beautiful!

Thanks for stopping by my blog and for sharing at Bloomin' Tuesday.

Love your pictures as always. The yellow and blue together are yummy! I was thinking mine were later this year too, though I only have last year to compare to. I thought maybe I hadn't gotten mine out to get enough sunshine so I lugged them all out and then it went and rained again yesterday! I do finally have lots of tiny buds that are just starting, but not much in bloom yet.

Love all the bright colors!

Love to see all your flowers!
I still have these holly hock seeds for you!
Paula

How did I miss this post??? Beautiful mammillaria blooms! Mine is still just sitting there doing nothing yet.

View my complete profile
CURRENT MOON
about the moon