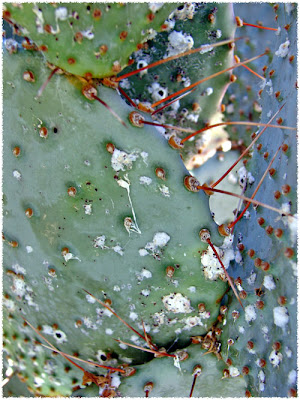 My prized Prickly Pear has a very serious infestation of Cochineal Scale. The once beautiful cactus is covered with the white waxy coating produced by the female Cochineal insect. This ugly fungus-like stuff serves to protect the sucking insect from birds and predatory insects as it uses its sharp proboscis to pierce the cactus skin and suck out nutrients. If the infestation becomes heavy as it is here, it will eventually kill the host cactus.

The Cochineal insect is difficult to get rid of once an invasion begins. Opuntias and Chollas are its favorite meal. The first step to try to rid the cactus of the insect is to spray it with a strong spray of water to dislodge the waxy coating, causing the insect to die when exposed. In this photo, you can see the small holes left by the insects, as well as the insect itself. Those dark dots in the center of the white stuff are exposed insects. If that doesn't work, and in the case of my cactus, it didn't--spraying with an Isopropyl alcohol/water mixture is the next step. I've done that and it didn't help this cactus, so the next step will a soap spray.

The final step is usually a chemical application. I don't want to use Malathion because I have a Jade Plant very close to the Prickly Pear, and Jades are very susceptible to Malathion. Even a little bit of stray spray can kill them. However Malathion doesn't seem to bother Prickly Pear at all.

If I can't get this under control soon, I'm going to have to take out this cactus, which is now close to five feet high, in order to keep it from spreading to my other Opuntias. The last best hope is that a a swarm of common predators, such as Lady Bugs, will swoop in and promptly devour the Cochineal insects, but Lady Bugs are few and far between around here. Even if I bought some to use, they usually just take off, and you just can't herd Lady Bugs. 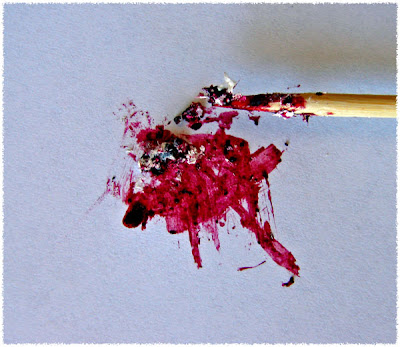 This is the test to determine if the invasion is truly the Cochineal insect. Cochineal means 'scarlet colored', and when squished, the insect is filled with the dark red substance. It's almost like a tick when full--except much smaller. The female is only about a quarter inch long. The red substance was used for centuries as a dye, and in some regions of the world, it still is. There are even Prickly Pear/Cochineal farms in regions of Mexico, Algeria and the Canary Islands.

The Cochineal insect is also used a natural food coloring in place of aniline dye. It's probably best to keep that under wraps. Many folks would be appalled to know their favorite red-colored food may contain the contents of an insect belly!

Whoa...I can't believe I am seeing this with my own eyes!!! I hope you have success with one of your treatments! Is there any way you can move your Jade plant to do the Malathion??? I hate for you to lose a 5 ft. tall Opuntia!!! I will cry if it happens!!! Thanks for showing this...I have never seen an infestation of Cochineal bugs before!

I'm keeping my fingers crossed that you can save your prickly pear! Love all your info about the Cochineal insect - it's a somewhat graphic picture of the insect guts - but what gorgeous reds . . . I can see why it is used as dye.

Too late - I'm not eating anything red again.

Fascinating little bit of info about the bugs being used as a dye. I'll pass that on to a friend that's into fiber crafts and natural dye. Not often I can sound smart around her.

cactus don't have a huge amount of parasites and pests... but the few they do have are viscious, and the best excuse for chemical warfare I can think of...

Very interesting! I had to dig out one of mine that was invaded with the insect. You are right- I stay away from red dye and know I know why!!!!!

From an artist's standpoint, I find these very interesting and I have used the red to paint with.

As the owner of the plant, I'm sure it is distressing and hope your treatment helps.

I have heard that cochineal dye is used to simulate strawberry coloring in things like yogurt. True? I don't know, but I suppose we eat bugs or bits of them all the time without being any the wiser.

oh my god ...
female Cochineal insect
i do not know this insect

Great post! I'm wondering if an horticultural oil spray would be of any use? I know it is often applied to smother scale type insects on woody plants, but I have no idea if it works on succulents.

I have used cochineal (it's sold in a dry form) to dye wool yarn (although I don't remember the specific mordant involved). The colors are beautiful.

Cochineal is also used to dye cosmetics. Lipstick, anyone?

As a keen gardener and artist interested in natural dyes, I cant decide if I would be upset about my poor prickly pear or elated at the bug squishing dye experiments to come!I really enjoy your blog, I am currently having a crack at designing a Verde Valley garden for a beloved friend and I have found your posts really informative and enjoyable:)

How about ordering a big box of ladybugs from an eco-pest control supplier like; http://www.tiptopbio.com/products.html

That looks nasty. Hope you will be able to save your prickly pear, it would be such a shame to loose it. Best of luck in combatting Cochineal Scale!

I think the non-flying ladybird lava can do a fair bit of bug munching, but I have no doubt you know all this stuff already. Herding ladybirds:D - a new olympic sport?

So sorry to hear about your cactus, I hope that you can take care of it before it gets killed. :(

yuck, I just set in a prickly pear underneath my dinning room window so I will def have to keep an eye on it. Say Aiyana, any idea as to wear I can find some barrel cactus? Everyone seems to carry just the gold which, as I'm sure you know, is not a native and can sun burn. Besides I am quite fond of the red spines. I'm trying to make my front yard like one big wash similar to the ones in the white tanks and Estrella mountian parks. I want to get three barrel cactus and plant them in a mound near my river run. I hope you can save your prickly pear they are so beautiful when they get big.

Thanks for all the comments. I treated the cactus again with a strong spray water and then used some soap spray. I'll wait another week to see if the majority of the Cochineal insects have died. If not, then I'll have to let it go. Once the Cochineal becomes overwhelming, the cactus will shrink and appear wilted, and eventually dry out. It's really an ugly sight. I just don't want to have a dying cactus in my garden! Euphanasia is the answer!

I've seen this around town- now I know exactly what it is. Good luck with yours- I hope you are able to save it.

Very interesting post -- I always learn something new from your blog. I hope that your prickly pear makes it -- I have seen some large specimens and they are magnificent. Keep us updated on your progress. -- Good Acres

I just came across this while searching for a solution to the exact same problem. My huge old prickly pear cactus has had this insect for 2 years, and it is now so ugly, infested and falling over. I'm wondering what happened to yours. Did you save it or did you have to remove it? (I am new to Southern California gardening and unfortunately relied on the wrong advice to just spray with water and not worry.)

Please see my post on Nov. 18, 2008which explains what happened to that cactus.
http://waterwhendry.blogspot.com/2008/11/tribute-to-prickly-pear-bloomin-tuesday.html

I have two other Santa Rita Opuntias and they are currently heavily infested with the scale. They'll go the way of the last one, as nothing I've tried with them is working.
Aiyana

I know I'm commenting on a post almost 2 years old but I found it as I was researching this evil little critter that was covering my cactus! This morning, armed with a toothbrush, hose, and spray bottle of soap water, I attacked these critters by scrubbing ALL of my cactus down to get them off. It took hours. Now that there are no more cochineal scale on them, I will be watching like a hawk should they return. I hope I wasn't too late for mine. These buggers are horrid to try to clean off... it's like prying chewing gum off a plant you cant' touch in the first place! Thank goodness for leather gloves. Only a few tiny needles got through to me. Love you blog and now have you saved in Reader!

Angie,
I've lost several prickly pear to Cochineal Scale. I just don't have the patience to go at it like you have! Some cacti will hang on for years covered with the ugly stuff, but even so, if the scale is ever defeated, it leaves the pads really unsightly. Of course more will grow, but the lower ones will never be the same. Santa Rita Prickly Pear seem to be the most suseptible, but I notice my Engelmann’s Prickly Pear is now infested. The cactus spread is at least 6 ft. wide and 4 ft. tall, so if it succumbs, then it's mean't to be. No more interventions for me after the initial washdown attempts!

find someone who is into dyeing fabric with natural dyes, they will come & remove all the cochineal happily foe free.

View my complete profile
CURRENT MOON
about the moon