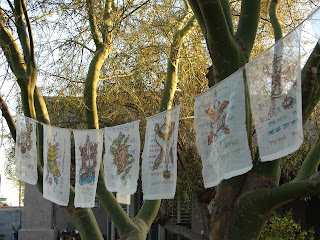 Several years ago, my daughter-in-law made this prayer flag for my birthday after I mentioned learning about Tibetan prayer flags on an art and photography blog. My daughter-in-law chose the symbols to use and hand stenciled the designs and lettered them in Sanskrit. She then hand colored each panel. She did not follow the traditional prayer flag format for my flag. Her work was so exquisite I did not want to expose the flag to the elements, so I hung it in my breakfast area. After a few years, I decided to place the flag in my garden, as it was meant to be. According to the Tibetan belief, as the images fade from exposure to the elements, the prayers of the flag are said to become a permanent part of the universe, just as life moves on and is replaced by new life. Tibetans renew their hopes for the world by continually mounting new flags alongside the old. This act symbolizes a welcoming of life's changes and an acknowledgment that all beings are part of a greater ongoing cycle. I'm glad I placed the flag outside where I can see it from my windows or when I'm walking in the garden. I think of the sentiment connected to prayer flag every time I see it moving in the breeze. 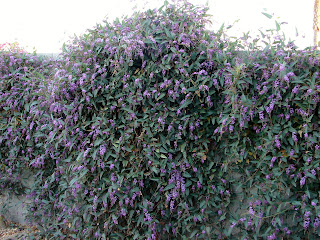 My Lilac Vine (Hardenbergia violacea) has grown so much that it now covers a good portion of the block wall on one side of my house. It has also grown over the wall, and can be seen from the roadway. That is how I knew it had bloomed. As I was rounding the corner to my house, I saw that the vine had bloomed overnight, so I went to my backyard and took a close look. Because the wall has a southern exposure, the sun shines in such a way that the blooms are not obvious unless you step into the shade of the house to shield your eyes from the sun. Had I not noticed the blooms from the roadway, I might have missed it at its peak blooming as it is at least three weeks earlier than previous years. 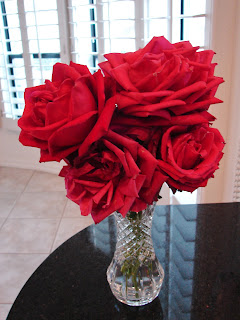 ﻿January is rose pruning month in the Phoenix area, but as usual, I was late and didn't get around to it until the first week of  February. Actually, any time between early January and early February will work, but I've had more April blooms when I do it early. By the time I got around to it, all the rose bushes had gone dormant, except my Red Intrepid. This rose bush lives up to its name--it produces blooms almost all year long--although in the extreme heat of summer, the blooms are deformed and sparse. It is also the one rose that I have that produces no scent. The pruning produced this nice bouquet!
at Tuesday, February 14, 2012

I just bought a Lilac Vine yesterday and will plant it tomorrow. I sure hope mine does as well as yours. It's gorgeous!

Hi Nancy,
Once this vine gets established, it really takes off! The only problem is it needs support. Mine has overtaken all the wire I strung up for it, so now I have to add more eye rings and wire. But, it's worth it!

Hi Aiyana...any chance you could take a look at Mr. Subjunctive's cactus and see what you think it is????

How are you doing??? I need to read this currant post of yours, but need to run off right this minute...will be back later today! I missed this one somehow!!!